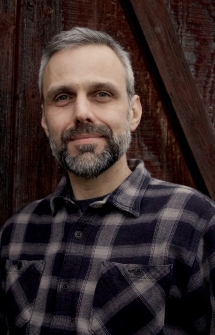 Scott Sackett is a filmmaker and radio producer whose work has appeared on the Public Broadcasting Service (PBS), National Public Radio, Public Radio International, AP Network News, and Amazon Prime. He’s the founder of Skipping Stone Pictures and a collaborative partner of Toward Castle Films, joining non-fiction filmmakers Paul Lamont and Chris Bové in 2008. Their first collaboration was the award-winning PBS documentary Elbert Hubbard: An American Original profiling the flamboyant and influential publisher and businessman who rose to national prominence in the early 20th century through his non-conformist writings and built the Roycroft community in East Aurora, New York, one of the most successful artisan communities of the Arts and Crafts movement. In 2011, they produced the War of 1812 re-enactment film Glorious Battle about the siege of Fort Erie, the bloodiest battlefield in Canada. The story is set along the Niagara River on the border between British Canada and the U.S., unfolding in first-hand accounts from soldiers on the front and civilians in the frontier towns caught in the crossfire. Recent productions include the 2017 award-winning national public television documentary Lake of Betrayal. The film tells the story of the Seneca Indians’ decade-long fight in the 1950s and 60s to defend their treaty-protected lands on the Allegheny River against the U.S. Army Corps of Engineers intent on building Kinzua Dam and the federal government pursing a policy of Indian termination. Scott Sackett and Paul Lamont’s public radio stories on current arts programs in the Buffalo-Niagara region fostering the social integration of immigrant children, the African-American community, military veterans, and people with disabilities was honored in 2018 by The New York State Associated Press Association for best radio series. Their latest production is The Songpoet, a film eight years in the making on the life and career of the Netherlands-based American singer-songwriter Eric Andersen.