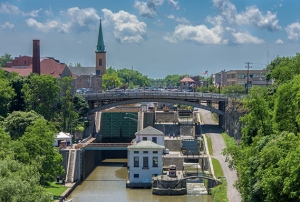 America’s Stairway places the historic Flight of Five locks on the Erie Canal in Lockport, New York, squarely in the American narrative as a symbol of a young and developing nation. It draws a direct line between the Erie Canal, the Flight of Five, and the birth of American tourism to today’s heritage tourism industry which is inextricably linked to community-based, grassroots preservation efforts and a community’s sense of place. In doing so, it has meaning and resonance that transcends both time and geographic location.