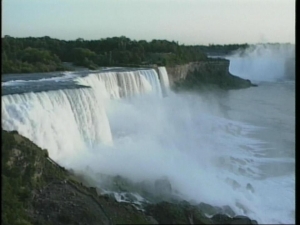 By the mid 1800’s the beauty of one of the world’s greatest natural wonders had been decimated by years of unbridled commercialism. The efforts of Frederick Law Olmsted and the “Free Niagara Movement” of the 1870’s and 80’s eventually led to the creation of the Niagara Reservation, America’s first state park. Today, the situation at Niagara has come full circle. Threats to the natural environment continue with the introduction of casino gambling and plans, on the American side, to develop the lower gorge for tourism. Fading in the Mist won awards and critical acclaim at the Chicago Film Festival, the Silver State Documentary Film Festival and the Columbus Film festival.