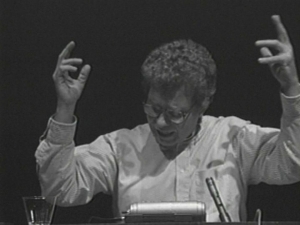 Describing poetry is equivalent to describing a sunset: no matter how eloquent the verbiage can be, the magic of the experience itself is inevitably absent from the description. However, Paul Lamont and Robert Borgatti’s award-winning documentary “in/word/out” circumvents the challenge of describing poetry by opening their camera to a group of wonderfully refreshing and candid poets including some who rarely take themselves and their art seriously. Film Threat calls in/word/out “one of the most delightful presentations of the poetic experience ever captured in a documentary.”  Featuring interviews with each poet and glimpses of their recitations, along with occasional vignettes which dramatize the poetry, in/word/out offers a human and often humorous journey into contemporary poetry. According to reviewer Phil Hall: “For anyone with a love of language, in/word/out is a joy to behold. Putting poetry into motion, let alone a motion picture, is quite a challenge and the film is a profoundly entertaining celebration of unique literary visions.”