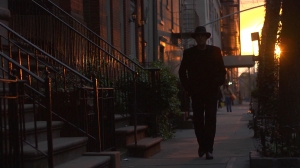 “I LOVED your film The Songpoet. I thought it was gorgeously shot and put together. Deeply soulful.  Clear-eyed and beautiful…It was that rare film that was so personal, I felt it was speaking only to me…It has lingered with me in all the best ways.”
~  Cameron Crowe
director, producer, screenwriter, and actor

Eric Andersen is the restless, wandering kind who follows his own river to its own destination.  As a musician, he defies categorization.  His artful mélange of love, despair, hope and stirred memory has earned him a passionate international following and the respect and admiration of artists ranging from Joni Mitchell and Leonard Cohen to Wyclef Jean and the late Lou Reed. The Songpoet offers a look into the mind, soul and creative process of this multifaceted, complex and singularly driven artist whose early career saw great expectations waylaid by misfortune.

From the Beats and Greenwich Village folkies to The Netherlands where Andersen now lives, The Songpoet follows his remarkable 50-year journey that continues today as he writes and records with a poetic passion.  With unprecedented access to Andersen and his personal archives, the film is a study on the culture of fame, the fragility of an artist’s career and the integrity of the artist as it reveals the indestructible energy that drives Eric Andersen — The Songpoet.

Preliminary filming began in December, 2011 followed by filming in April, 2012 in Toronto, Buffalo and New York City.  In November of 2012, filming continued in The Netherlands, where Andersen now lives, as well as in Germany and France. Additional filming took place in LA and Nashville. All principal filming was completed in Norway in January, 2017. The film had its world premiere at the Music Film Festival in Copenhagen on September 13, 2019, its North American premiere at the Santa Barbara International Film Festival on January 23, 2020, and premiered on PBS stations nationwide on April 24, 2021.

The Songpoet Trailer 1 from Paul Lamont on Vimeo.

Clive Davis from “The Songpoet.” from Paul Lamont on Vimeo.

Anthony DeCurtis, Contributing Editor at Rolling Stone Magazine. From the film “The Songpoet.” from Paul Lamont on Vimeo.