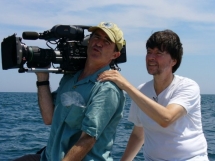 Stephen McCarthy is a director of photography whose thirty year career has spanned the width and breadth of non-fiction filmmaking. His work appears regularly in prime time documentary series including PBS’s American Experience, American Masters, Frontline, Nova and P.O.V. as well as HBO’s Young Arts Masterclass.​ Stephen has served as cinematographer for two recent Emmy-nominated PBS series: Cancer: The Emperor of All Maladies and Your Inner Fish, based the best-selling book by evolutionary biologist Neil Shubin. He has also photographed the Peabody- and Emmy-award-winning series The African Americans: Many Rivers to Cross; two seasons of HBO Family’s Emmy-nominated Masterclass and three seasons of PBS’s Finding Your Roots with Henry Louis Gates, Jr.. ​ Stephen’s photography has also been featured in Whitey: United States of America v. James J. Bulger​ as well as both War of the Worlds and Butch Cassidy and the Sundance Kid for PBS’s The American Experience. Forthcoming projects include Mass Extinction: Life at the Brink for the Smithsonian Channel and Ruby Rige to the Oklahoma City Bombing for The American Experience. Also in the works is a far-reaching documentary about Alzheimers Disease for PBS’s Nova. Stephen is a visiting lecturer on cinematography at Boston University, Rhode Island School of Design, The Maine Media Workshops and MIT’s graduate program in science writing. He lives in Boston.